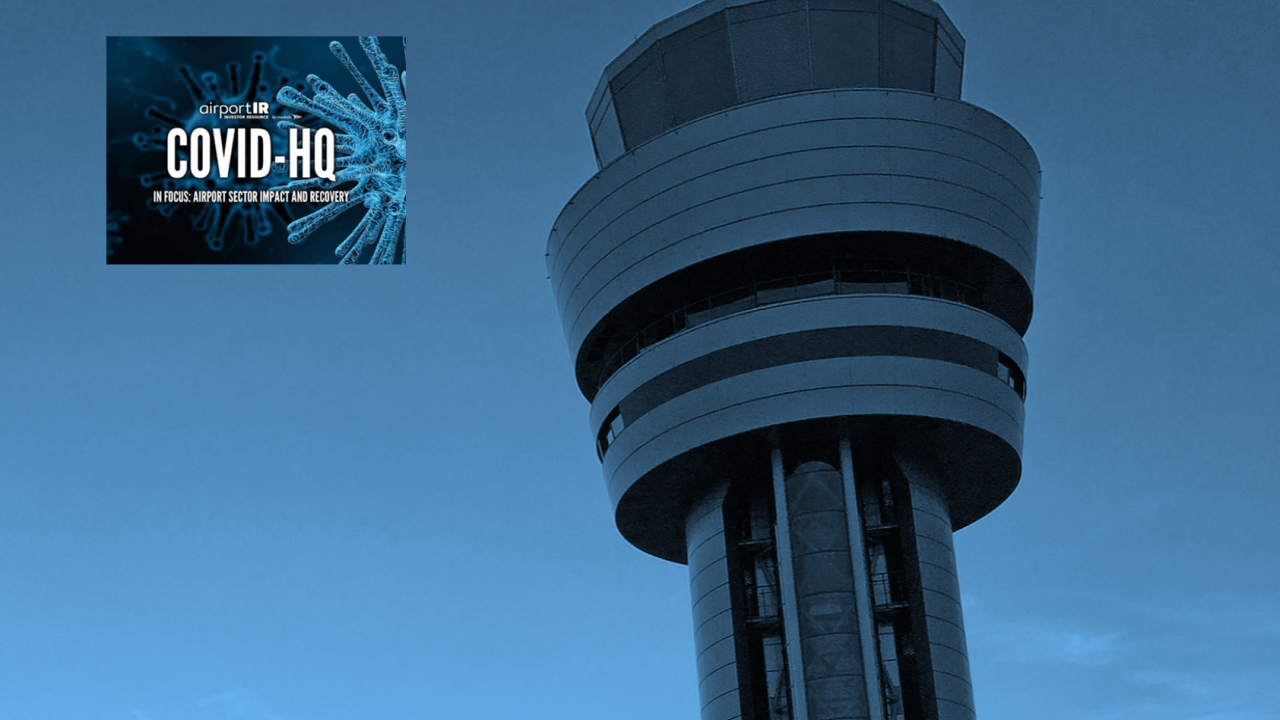 Just over a month ago, AirportIR posted its first global update on the COVID-19 coronavirus disease. Then we were reporting 1,000 fatalities that were overwhelmingly restricted to China’s Hubei Province. Its capital city of Wuhan is where the epidemic originated. At that time, we were hopeful that a pandemic might be avoided as only 0.9% of cases were outside the PRC. Asian airports were being hit hardest by slashed international capacities to/from China that began during Lunar New Year at the end of January. Keeping this disease contained was wishful thinking. It has become a global pandemic – spreading to around 160 countries at the time of writing [see end panel for more details]. Enormous rescue packages indicate the level of government concern everywhere. In Europe these amount to more than €1 trillion, while the US has pledged support of substantially above US$1 trillion. On Wednesday, the European Central Bank also launched a Pandemic Emergency Purchase Programme worth €750 billion – a bond-buying exercise designed to support Eurozone countries. The mantra of doing “whatever it takes” to shore up economies has become widespread in the hope of stabilizing crashing financial markets. Airport and airline businesses are among the worst impacted industries from travel bans implemented to safeguard against COVID-19. Airlines have been forced to ground large parts of their fleets, leaving some hub airports looking like ghost towns. Aviation-related Stocks Pummelled Modalis Infrastructure Partners has compiled data from a select group of traded airports, airlines and also their stock exchanges to quantify the market fallout. These data will be updated regularly. In almost every case, the first quarter of 2020 (up to March 16) has been a disaster. Among the airports analysed, average stock values shrank progressively each month: -8.3%, -17.4%, and -31.2% (to March 16). These declines were generally greater than those of the stock exchanges they trade on.

The worst hit airports groups were Corporación América and Fraport with declines of -71.9% and -59.1% respectively, while for airlines LAN slipped by -66.3% and Qantas by -61.8% over the same period. The Australian carrier recently said it would cut group international capacity by approximately 90% until the end of May at the earliest. The most resilient airport and airline companies were Asian: Beijing Capital (-21.9%), Airports of Thailand (-24.9%), China Eastern Airlines (-33.3%) and Singapore Airlines (-35.0%). This possibly reflects some relief that China’s efforts at combating the spread of COVID-19 have been successful, allowing capacity to be returned to some Asian routes. While China’s airline seats remain sharply down on 2019, year-on-year comparisons over the past few weeks indicate strong recovery, according to seat analyst OAG. From a -70.8% trough on 17 February, capacity had rebounded to -38.7% on the March 16 [see table below]. Unfortunately, this is not true for other Asian markets. Over the same period, Singapore’s seat capacity (year-on-year) has slipped further from -18.5% to -35.5%; South Korea from -15.7% to -56.1%; and Hong Kong from -57.7% to -80.8%.

Europe is Stuck in a Quagmire The European picture has also worsened as travel lockdowns tighten. The same OAG data and timeline show UK capacity moving from -3.0% to -19.3%; Germany from -6.6% to -30.2%; and Italy dramatically sliding from -2.8% to -73.9%. Statistical data compiled by tracking website Flightradar24 comparing flights on February 28 versus March 17, indicate the severity of the collapse in Italy. Flights from Milan Malpensa plummeted from 229 down to eight, and Rome Fiumicino from 320 to 48. In South Korea – the second most affected market in Asia Pacific after China – Incheon International Airport saw a big hit (406 departing flights down to 98). 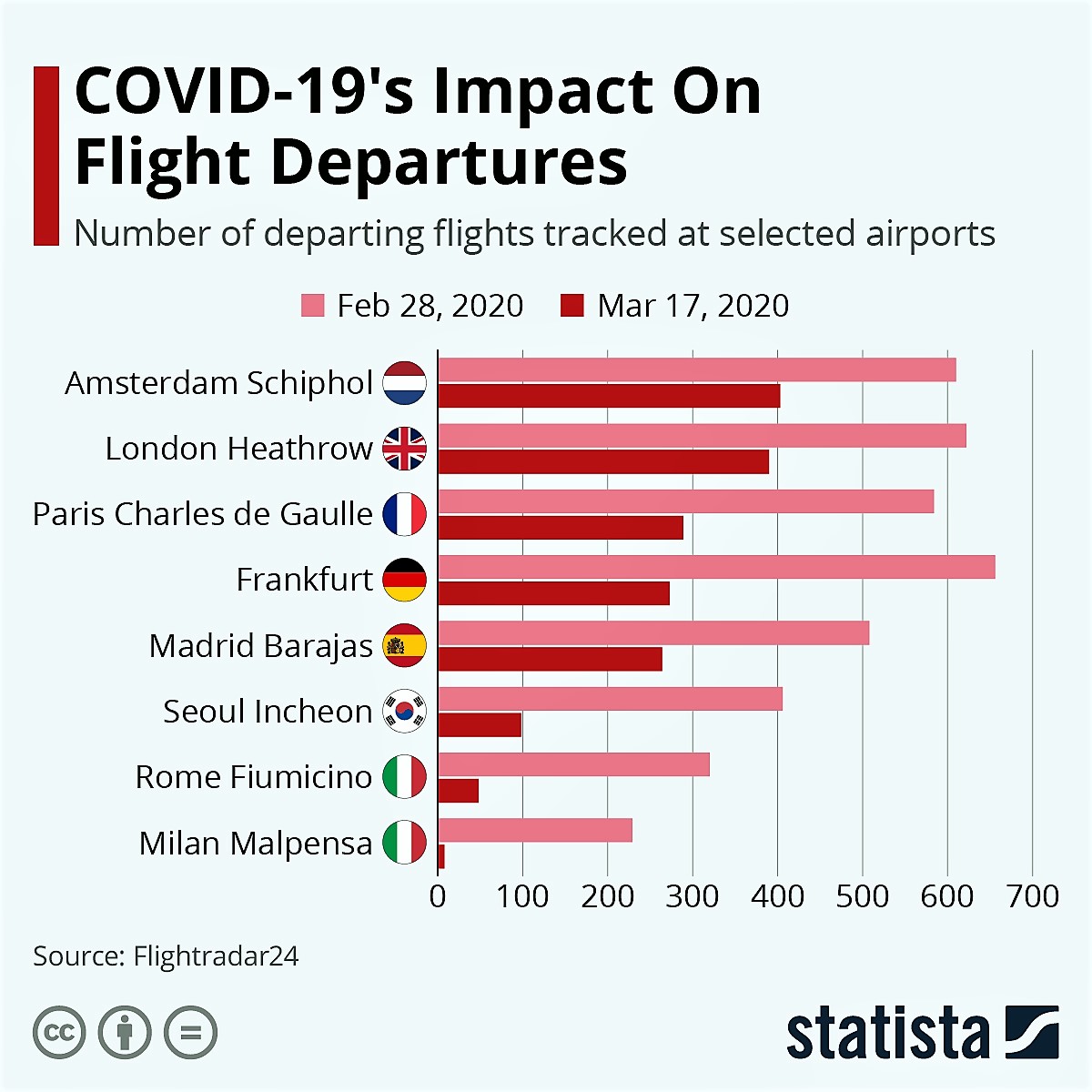 Major European hubs have all fallen, but not on such large scales – so far. Madrid Barajas, for example, saw its total departure flights slide from 508 to 264. Among the world’s top 30 country markets, OAG says the biggest losers in seat capacity between March 9 and March 16 were Germany, Switzerland, Saudi Arabia, United Arab Emirates and France. OAG’s Chief Analyst John Grant comments: “Airlines are making dramatic capacity cuts and cancelling operations. Many have increased the frequency of their schedule updates to OAG with more and more carriers moving to daily submissions.” He admitted that his team were seeing such unprecedented changes that processing the volume of data for verification and synchronization was challenging. “Our expectation is that next week’s data snapshot will show a significant reduction week-on-week as airlines reach a point where all but the most essential services are dropped in major markets,” he said. Airports to Take Q1 Revenue Hit of US$4.3 Billion The trade association for airports, Airports Council International (ACI World), is estimating global industry revenue losses of “at least US$4.3 billion” for the first quarter of 2020. Prior to the COVID-19 outbreak the forecast was positive at US$39.5 billion. Most of the above losses (about US$3 billion) are expected in Asia Pacific. “This is approximately equal to the total annual revenue of two major European or Asian hubs combined,” says ACI World. The organization is now assessing the hit to Europe – the second most-impacted region – and other world regions as more data become available.

Meanwhile, Brian Pearce, Chief Economist at airlines body IATA, has warned that “airlines are fast running out of cash” with the typical carrier having just two months of liquidity at the start of this year. Under IATA’s ‘extensive spread’ scenario for COVID-19, the association – in early March – forecast passenger revenue losses of US$113 billion for 2020, however, this ‘worst case scenario’ has, in fact, worsened. This week, IATA’s CEO Alexandre de Juniac said: “We could not have foreseen the developments of the last days with massive restrictions on travel being put in place – and with no clear understanding how long they will remain.” As well as shrinking the size of passenger operations, travel bans also have the effect of removing significant cargo capacity which is vital to supply chains. De Juniac has therefore appealed to governments “to take some extraordinary measures” to help airlines. Slots Battleground Among them is a waiver on slots – particularly the 80/20 ‘use-it-or-lose-it rule’. De Juniac says: “Airlines should not be hindered by the 80-20 rule when adjusting their operations to the reality of today’s market. Governments have responded positively to this.” Although he notes that the EU has only granted a waiver until June. Meanwhile, ACI World has cautioned on fully removing slot regulations. The airports group says: “A global suspension of slot rules would jeopardize the ability for countries to stay connected with the world which will in turn have knock-on effects to economies. In markets that are severely impacted, a suspension of the 80/20 rule may be considered for a limited period.” ACI World Director General Angela Gittens notes: “The airport industry recognizes that all stakeholders of the aviation ecosystem are heavily impacted by the COVID-19 outbreak, and as such favours a strengthened cooperation between airports, airlines, and regulatory authorities.” She adds: “Airports rely heavily on airport charges to fund their operating and capital costs and operators find themselves under intense pressure during periods of traffic decline.  Airport revenues must be sufficiently protected to ensure safe and sustainable operations. Measures to limit the collection of airport charges would be ill-advised.” The COVID-19 pandemic still has some way to run as it sweeps westwards. It will force a number of weaker carriers out of business, as already witnessed with the UK regional airline FlyBe. Where only a few carriers dominate, in markets such as Brazil, this could have major consequences for them and their airport landlords. During this unprecedented period for the aviation business, airlines and airports will have to review their relationship at a more fundamental level than at any time previously. A more collaborative approach may be required and could be one positive outcome of this crisis. Europe is the COVID-19 epicenter today By Thursday March 19, coronavirus cases had passed 230,000, with deaths nearing 10,000. While 81,000 of confirmed cases were in China, almost 105,000 were now in Europe (sources: Johns Hopkins University, World Health Organization). The WHO chart below indicates clearly how the virus (SARS-CoV-2) has been moving away from Asia and into Europe where the EU and UK markets combined account for 25% of global passengers. 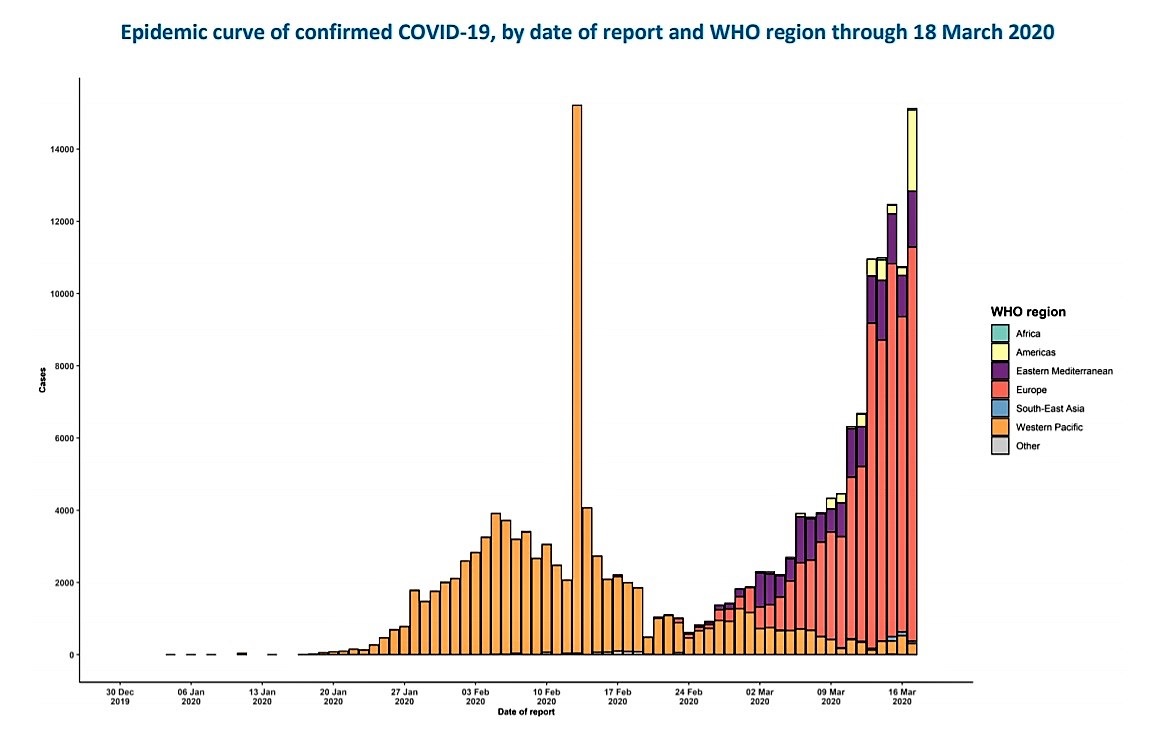 Less than a month ago European cases of COVID-19 were limited but they have seen exponential growth since. Cases in the Americas are now also accelerating.

While China and other larger Asian nations such as South Korea and Japan, have been recovering from their outbreaks, Europe has become the new epicenter. The US could be next in line for an explosion of confirmed cases now that it has started to ramp up its previously limited testing services. As of March 9, the US was testing at the rate of 26 per million people compared to 387 per million in the UK for example (source: government data via Worldometers).