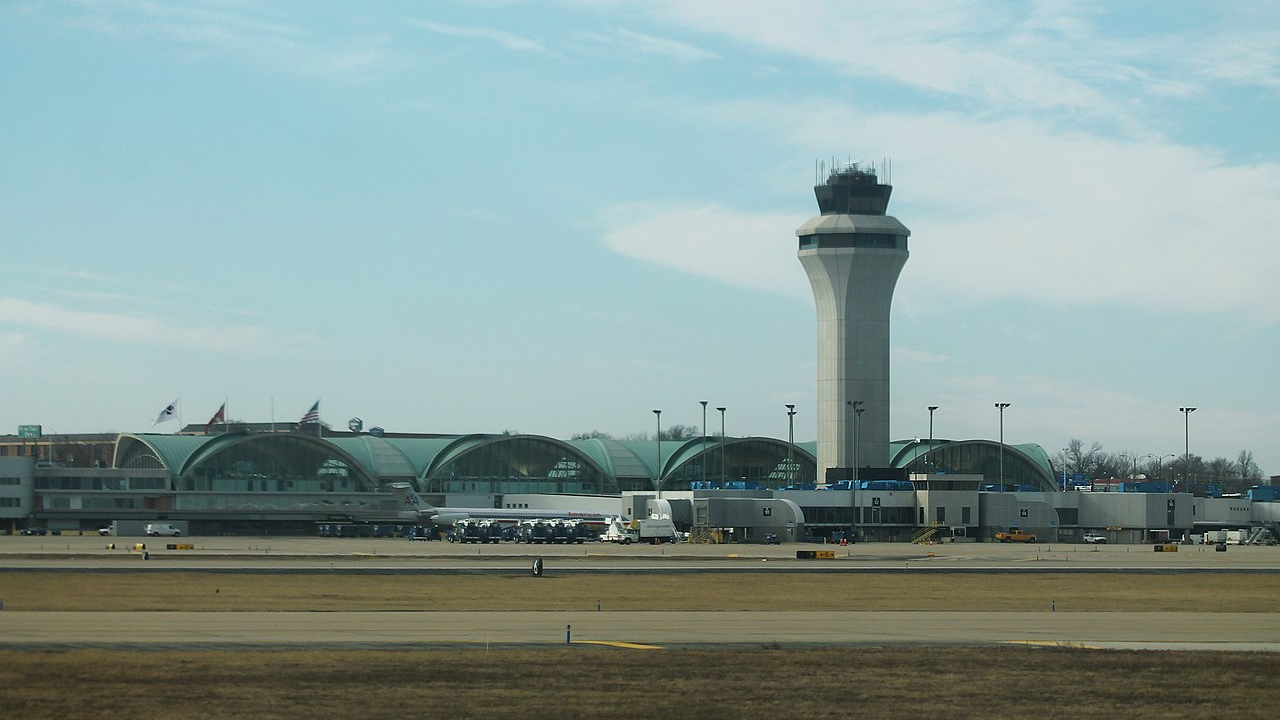 In early 2017, under the direction and authority of previous long-serving Mayor Francis Slay, the City of St. Louis applied to the Federal Aviation Administration (FAA) to consider St. Louis Airport (STL) as a candidate for the FAA’s Airport Investment Partnership Program (AIPP) … formerly known as the Airport Privatization Pilot Program. The AIPP sets out the conditions under which municipal governments that own/operate commercial U.S. airports and receive federal funding may structure P3s with qualified investors and operators. The program facilitates long-term concessions—but not sale—to achieve operational, financial, service quality and other related objectives. Valued at over USD2.5b before repayment of STL’s USD600m debt, the City was looking to shift this hefty liability onto would-be private sector partners. In June 2018 consultant group FLY314 (the “314” being the St. Louis telephone area code), a subsidiary of Grow Missouri Inc. funded by local billionaire financier Rex Sinquefield, was engaged to advance the STL privatization initiative. Under the terms of the FLY314 arrangement, Sinquefield would only be reimbursed by the City upon sealing a deal with a private-sector investor/operator for STL. The hotly debated consultation and approval process involved the FAA and airlines operating at STL, as well as the local estimate board and city council. Airlines representing over 80% of STL’s passenger traffic and 85% of its cargo volume voiced support for the privatization initiative.

Privatization Gets a Step Nearer for St. Louis Lambert Airport as Performance Peaks

Facing stiff headwinds from the outset, local community groups and government officials including the City’s own Comptroller called for a public referendum on the STL privatization initiative. Signalling a tepid resolve, St. Louis Mayor Lyda Krewson declared in late Sep. 2019 that she would not oppose a public vote on the project, contrary to her previously stated position. In early Nov. 2019, the St. Charles and St. Louis counties also waded into the fray, demanding the study of options/implications for regional control and merits of privatization. For the City’s 550 employees working at STL, three options were being bandied about; a five-year job guarantee with the private operator, application/preference with another city department or retaining their current roles during a two-year transition period. On Oct. 04, 2019, a Request for Qualifications (RFQ) was released by City to solicit interested parties for participation in the STL privatization process, with a submittal deadline set for Nov. 1, 2019. A total of 18 parties responded to the RFQ including AENA, AMP Capital, Atlantia, Blackstone/PSEERSM, daa Int’l, GIP, GRID Realty, MAG, Momentum Aviation Partners, Morrison & Co., Oaktree, Odinsa, OMERS/Fraport, OTPP/Copenhagen, PSP/AviAlliance, Royal Schiphol and Vantage/Corsair.  Reportedly, this initial group of respondents was culled down to 11 based on an independent/external consultant recommendation. A further short-listing and release of the Request for Proposals (RFP) was anticipated in early 2020, with bid submission/review, award and takeover expected to take place by late 2020. Unexpectedly however, on Dec. 20, 2019 Mayor Krewson announced that the STL process was effectively dead, citing lack of public support for the privatization initiative as the basis for the abrupt about-face. (Refer to Mayor’s letter below.) According to local media reports, leaked minutes of a closed-door meeting identified potential conflicts-of-interest related to STL Aviation Group, which had failed to make the initial cut.  Only days earlier, Mayor Krewson had defended a top aide’s intervention on behalf of STL Aviation Group. A lawsuit was also filed against the City relating to disclosure of details from closed public records and meetings, which are suspected to have had a bearing the Mayor’s decision, as well. Undoubtedly, this self-inflicted sabotage, and the Denver Great Hall project derailment earlier in the year, will sour the appetites of many international investors and operators that were keen for piece of the U.S. airport P3 market.  Likewise, as with the ill-fated Chicago-Midway initiative before it, this latest failure will provide prime fodder to local opponents of future privatization projects across the country. 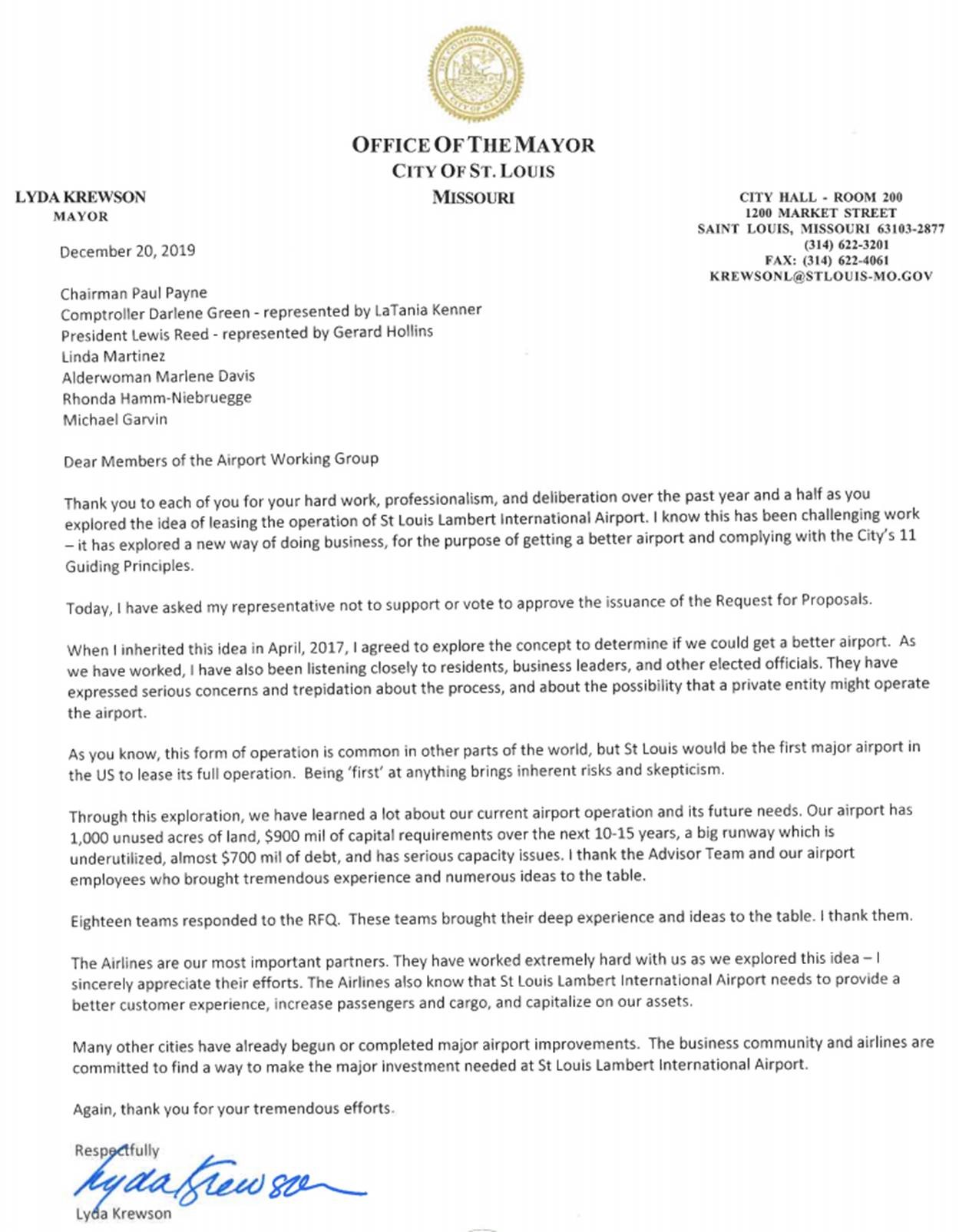