Aviation analyst OAG has given an optimistic forecast that airline capacity by the end of this year will be at 87% of 2019. That would be a great result for the industry, laying some solid foundations for 2023.

Traffic across most of the world is rebounding—including Asia Pacific where COVID restrictions are finally easing, even in China to a small degree. However, that huge market is yet to open up to large-scale international travel. OAG’s latest data suggest that scheduled seats per month this year are closely tracking (but still much less than) 2019, and that the gap will close in November and December (see chart below). 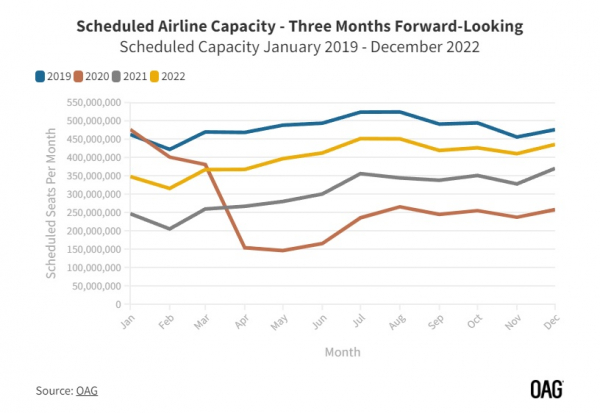 There are plenty of obstacles as well, some appearing without much notice, so forecasts need to be taken with a pinch of salt. OAG Chief Analyst, John Grant, said: “There are strong headwinds to be faced this winter, but at least the industry has proven the strength of the market in even the hardest of times. If only there isn’t another round of COVID as winter approaches.”

Another round is likely—but unless it is a very severe—there seems a fairy wide consensus that we will not see the types of lockdowns that decimated the air travel industry. As early as January, both the U.S. and U.K. administrations had made this clear.

Instead of COVID, nations are confronted by serious economic issues such as rising interest rates; rising inflation and costs which is affecting discretionary spending; currency volatility; and a highly unstable geopolitical environment due to Russia’s invasion of Ukraine.

So far though, revenue for many carriers has risen this year along with profitability on the back of harsh staff cuts in many cases. But costs of doing business have also risen. Nevertheless, there is still confidence in the market, reflected in airline capacity broadly remaining stable from week to week. OAG expects this to continue to the end of the year. The proviso for the capacity lift to 87% of 2019 is that there are “no major events before the year-end.” 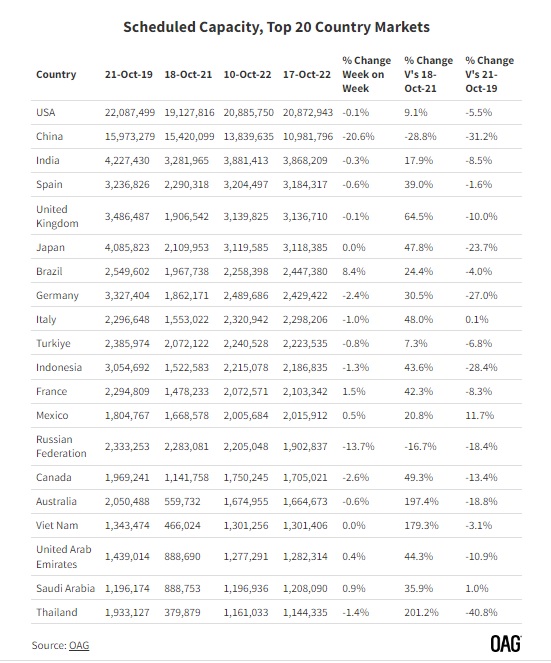 “If 4.8 billion scheduled seats are achieved in 2022 that will be 31% more than in 2021,” said Grant. “The industry would only need to record 20% growth from this point to be back to 2019 levels—perhaps a big ask given the current environment but something to strive for.”

Every effort will be made to get back on a 2019 growth track as quickly as possible. Looking at seat capacity in the top 20 air markets for the week ending October 17, 2022, versus the same week in 2019, there are some stark differences in recovery (see chart above).

Mexico out in front

Mexico is far ahead of other countries at 11.7%, followed by Saudi Arabia (1.0%) and Italy (0.1%). Every other market in the top 20 remains negative, from -1.6% in Spain to -31.2% in China and -40.8% in Thailand. It is clear that in countries that do not have strong domestic route networks, or where COVID restrictions are only partially lifted like Asia, the suffering is greater. Markets affected by both factors are faring least well.

The good news is that stability has returned to airline schedules. Over a seven-week period that OAG looked at (September 5 to October 17) most carriers made less than a 2% change in their capacity, aside from China-domiciled airlines. “At the height of the pandemic we were seeing capacity changes of over 10% regularly over such a time series, so things certainly are settling back down,” noted Grant.