The new international terminal at Comodoro Arturo Merino Benítez International Airport in Santiago, Chile (SCL), and run by Nuevo Pudahuel*, has been completed. As the largest new terminal to be built in Latin America in recent times, it is also one of the most significant and innovative in the world.

One of the main objectives of Nuevo Pudahuel was to increase capacity from 2014’s 16 million passengers to 30 million. This was a major factor in designing the new terminal so as to accommodate the doubling of annual passenger throughput. In addition, the aim was to provide international passengers with world-class facilities, and to repurpose the existing terminal for domestic flights. 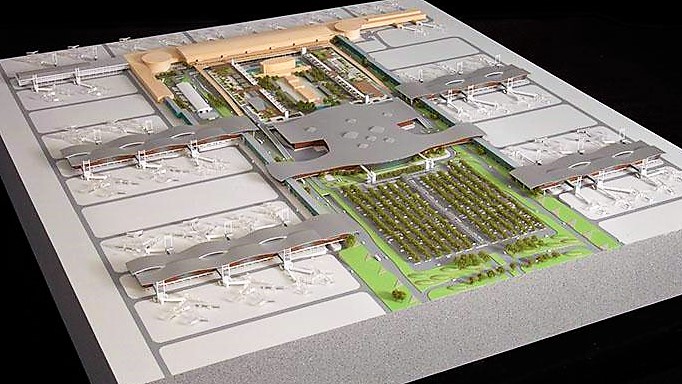 The scale of the airport expansion is ambitious.

The project required a major new processor for arriving and departing international flights. This included:

The terminal design had to meet key challenges. How could passengers and airline staff connecting between international and domestic flights move easily and efficiently between the two terminals?

How could arriving international passengers avoid the maze of elevators, stairs and escalators that are a typical annoyance at many airports? And how could the design of this major new terminal be ‘uniquely Chilean’ and deliver an airport experience that offers passengers something that both “surprises and delights”?

The design team came up with some remarkable innovations in response to these challenges. One of the most compelling was in the way passenger connected between the domestic and international buildings.

The masterplan inherited by the team would have required those travelers and crew to go by vehicle from one terminal to the other. We proposed changing the roadway system and orientating the new processor so that the ‘front door’ for international check-in would face the ‘front door’ for domestic check-in.

This would enable connecting passengers and crew to walk from one terminal to the other through a landscaped plaza – a more environmentally-friendly, efficient and pleasant experience than being driven between the terminals. This novel, attractive and cost-effective concept was enthusiastically accepted by the client: the Chilean Ministry of Public Works.

Another innovation was to provide deplaning international passengers with naturally lit ‘interstitial corridors’ that would take them to the arrivals processor. Stantec has pioneered this approach at other international terminals including Ottawa in Canada and Nassau in the Bahamas.

It is important to make the travel experience easy for the increasing number of passengers with mobility challenges. The interstitial corridor arrangement is far more passenger-friendly and more cost-effective than the typical upper-level sterile corridors that require inbound passengers to use elevators, stairs or escalators to move up and down.

Stanis Smith FRAIC AIA – Stanis is an independent architect and strategic advisor to airport clients. He led Stantec’s airport group from 2003 to 2019 and led the concept design team for Santiago’s new international terminal.