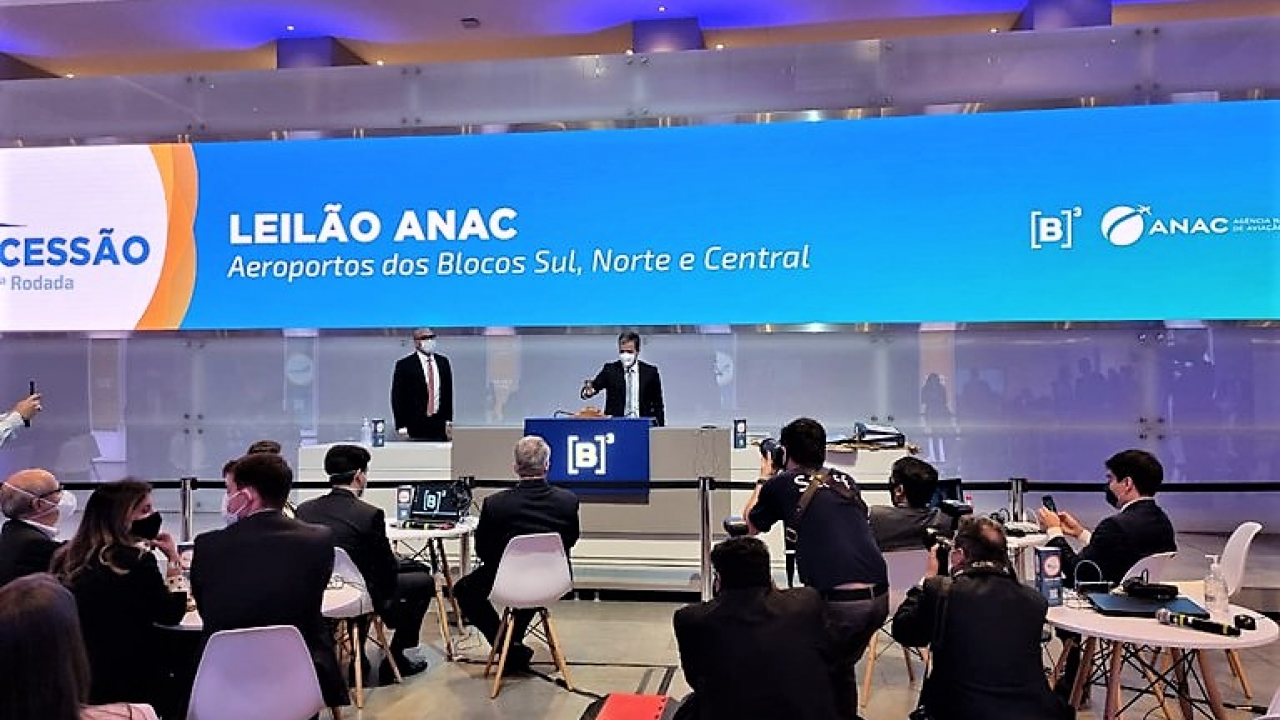 With the onset of the COVID19 pandemic last year, Brazil’s aviation regulator, the Brazilian Civil Aviation Authority – ANAC, and the government, were quick to flex the rules on its airport privatizations to garner interest. It has meant that the Brazilian aviation sector has suffered less of an impact than others around the world.

On April 7 2021, the results of the bidding for 22 airports split into the three clusters were revealed. As a reminder, the gateways were divided as follows:

In this latest round, the North cluster had a new reference value for air cargo movements in Manaus Airport and the risk-sharing between the concessionaire and the Granting Authority after the 5th year if there is any change on tax legislation in the Manaus Free Zone.

Through this instrument, the concessionaire can get the variable contribution decreased (starting after fifth year) – and if the decrease isn’t enough other legal instruments can be applied such as: 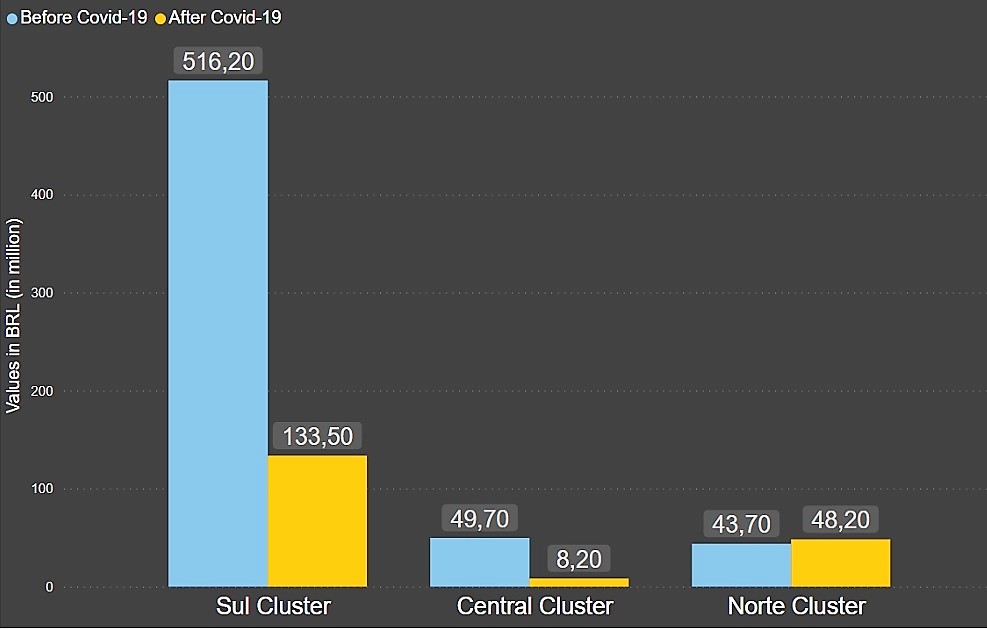 How the minimum bids were changed

The changes for the Central and South clusters reflected the pandemic timing, but to me they were akin to getting a bargain at the dollar store. The changes ensured savings of $7 million and $68 million respectively (at the rate of $1 = BRL 5.58). Meanwhile the North cluster was $805,000 more – which is not very much across a 30-year contract.

Essentially all the clusters were a good deal and in September 2020, I wrote an article for airportIR.com to this effect based on the fact that domestic travel is recovering and many regional airports will see the benefits.

Bidders must have seen it this way too as the sixth round or privatizations has turned out to be the most successful so far. Infrastructure group CCR paid a premium of more than 9,000% for the Central cluster (versus the minimum bid), and by more than 1,500% for the South cluster! Vinci snapped up the North cluster by paying almost 780% more than the minimum bid.

In all three cases, as the charts below show, there was limited competition among the bidders. The number of bidders was low because the rules were changed to attract investment funds, but as it turned out, from the eight players that offered a bid in the sixth round only one was an investment fund. The rest were airport operators. 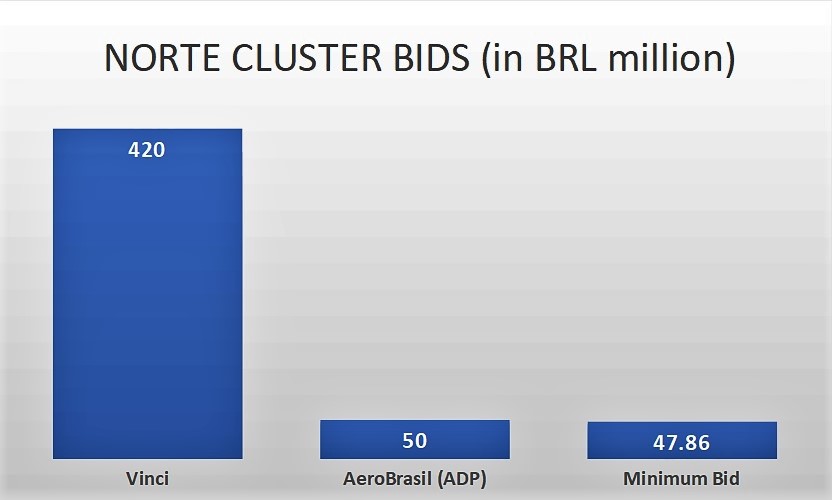 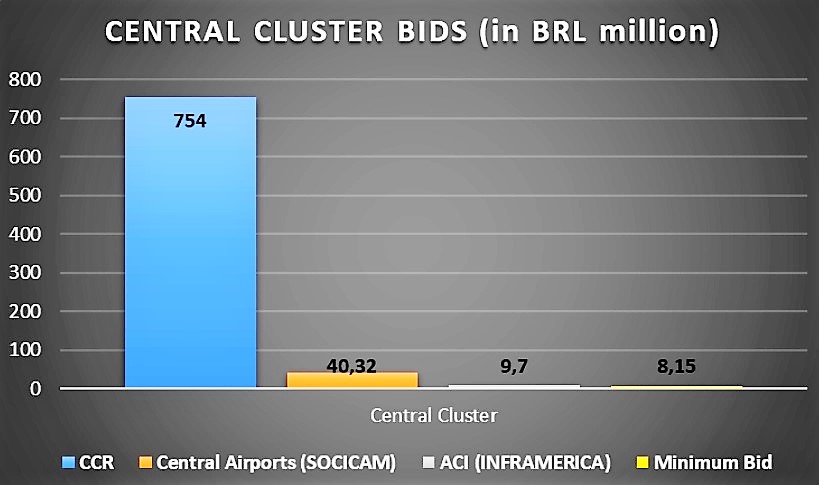 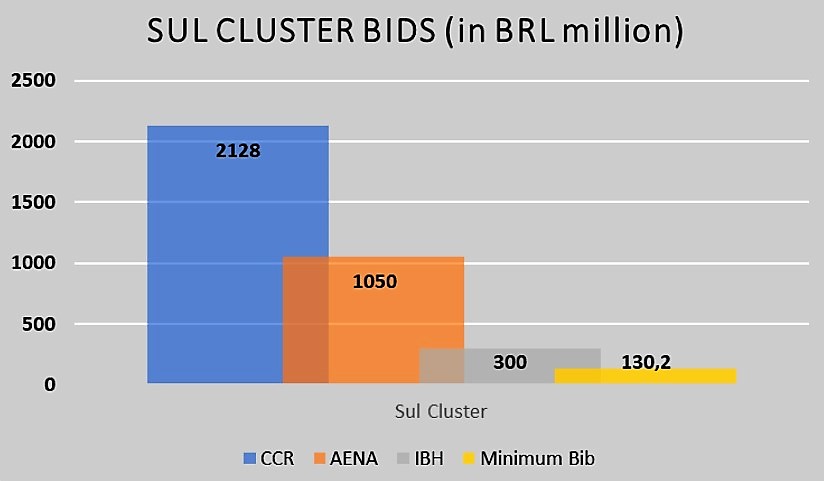 Across all three clusters there were clear front-runners

The high premiums offered by CCR for the South and Central clusters were not a surprise because these clusters have good potential for cargo and logistics. For instance, Curitiba (CWB) is the main airport for small parcels from China. Each package is between 200-300g, but there are more than 200,000 packages per day. Navegantes (NVT) is growing its logistics operations and, more generally, Brazilian domestic aviation has shown that it can recover quickly in the pandemic period.

Another point about this round is that CCR played to win – there was no chance for competitors. CCR had cash on hand due to a public float in 2017. CCR picked up about USD1 billion (USD1 = BRL 3.27) and it has added a few concessions since then.

With 15 out of 22 airports from the sixth round, CCR is now the main private airport operator at big and medium hubs in Brazil. Its portfolio is 16 airports in Brazil (including the existing Belo Horizonte gateway), plus three in Latin America (Quito, San José and Curaçao). It has been speculated that CCR might bundle up its airport business and do an IPO.

As for VINCI, the winner of the North cluster, it wants to grow its airport portfolio in Brazil. The French group bid in the fifth round for the Northeast cluster of six airports – REC, MCZ, JPB, AJU, CPQ and JDO – and it already operates Salvador (SSA). Manaus is the jewel in the crown of its latest win as it is Brazil’s third largest cargo airport and central to the economic development of the Amazon region.

So, even with the ravages of the COVID19 pandemic, Brazil’s privatization program has shown itself to be attractive to operators.

The lesson for the next round is attracting more investments funds to increase the competition and guarantee a high premium as with past rounds. That is important because the seventh round will involve the most profitable domestic airports in the country: CGH and Rio’s SDU.