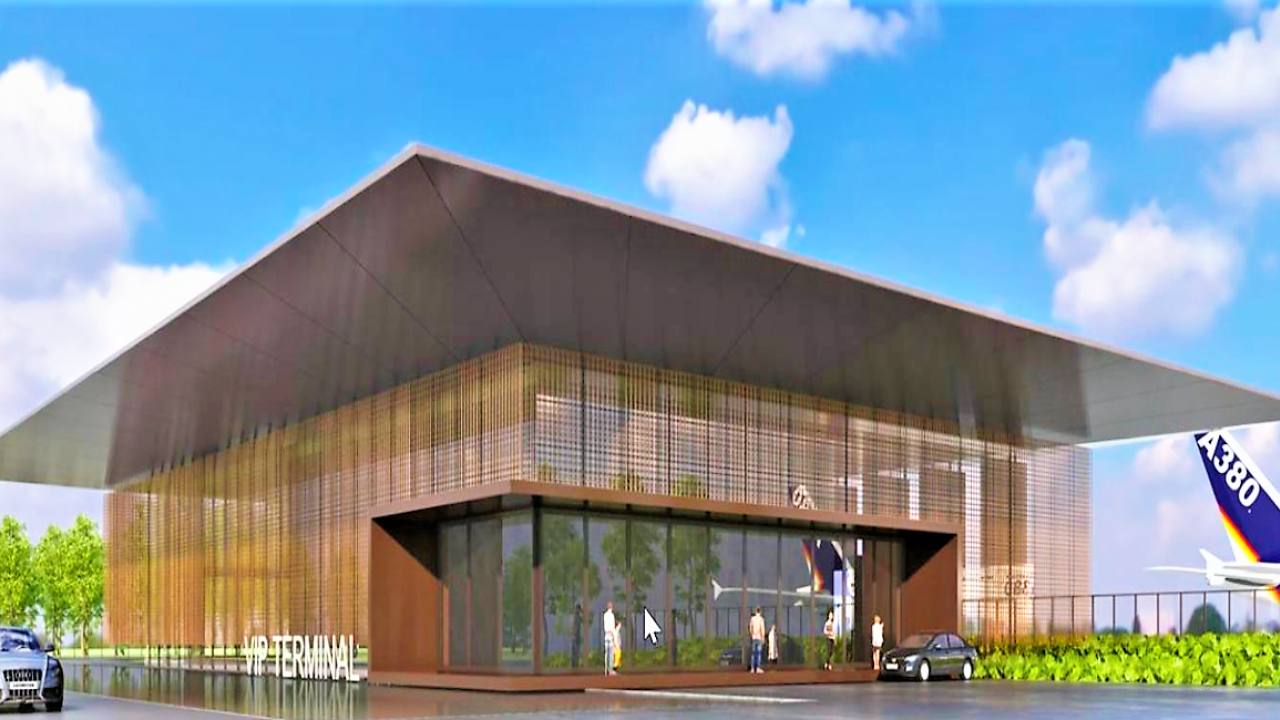 A major transformation will soon be underway at the busiest air gateway in South America—São Paulo International Airport (GRU)—following the award, this month, of a concession for a new VIP terminal plus the rights to operate eVTOL (electric vertical take-off and landing) services.

The Brazilian airport—privatized in 2012, and operated by Concessionária do Aeroporto Internacional de Guarulhos S.A. with 51% of the shares and the state-owned Infraero with 49%—has signed a 40-year concession agreement with AEPM Brazil, a subsidiary of Canadian aerospace company AEPM International, to build and operate the first VIP terminal in South America.

The new 5,100 square meter building, costing $9 million (BRL50 million), will be located on the existing GRU site and is set to open at the end of 2023. As part of the deal, the terminal will also be used for eVTOL operations which are planned to start by 2026. 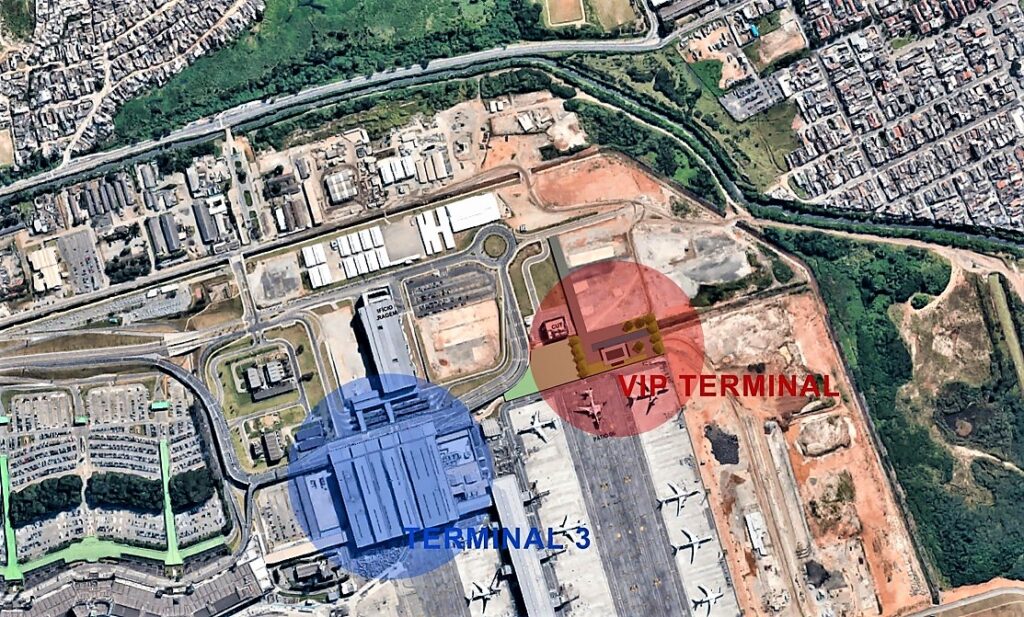 The new VIP terminal will have a very accessible position at GRU.

In one fell swoop, GRU is opening up the market for both personalized and tailored air travel through the VIP offering, while also establishing a vertiport hub ready for the next generation of carbon-free electric air travel.

AEPM predicts that over 100,000 passengers per year will be using the new VIP terminal by 2045: a mix of high-service passengers traveling on regular scheduled routes at GRU, as well as local/regional transfers by eVTOL. 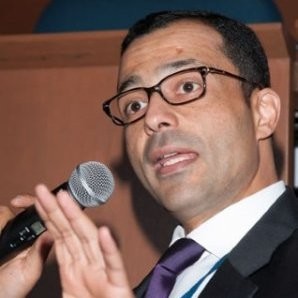 AEPM International’s CEO Fethi Chebil: “Our view is that advanced air mobility will be a very important market (and) will start to drive big revenues by 2026.”

This post-Covid deal is important for Brazil, coming ahead of another round (the seventh) of airport privatizations in the country. “This kind of investment underscores international trust in Brazil’s economy,” said Marcelo Sampaio, Minister of Infrastructure. “The ministry is committed to supporting GRU and AEPM Brazil in making this project a success.”

Those words of support reflect Brazil’s own aviation ambitions. The VIP terminal is claimed to be the biggest in the world and the vertiport element could help to put GRU at the forefront of this new business globally. CEO of GRU, Gustavo Figueiredo, commented: “We look forward to offering the best passengers experience in Brazil and in the world. The VIP terminal is aligned with our strategy and is part of our growth plan.”

Much now rests on the shoulders of AEPM Brazil to deliver on its expertise in airport concessions and operations. Not only must it create a unique experience for international and domestic travelers at GRU—including economy and business ticket holders pointed out Dr. Fethi Chebil, President and CEO of AEPM International—but the company will also help in establishing a network of vertiports connecting the Guarulhos hub to other areas of the vast São Paulo metropolis.

So what can we expect from this novel project? AirportIR sat down with Chebil in London to learn some of the finer details of the development and why AEPM Brazil invested in GRU in the first place.

Before hearing directly from the CEO it is worth noting that much of the design and infrastructure work is already in place. Renowned Brazilian architect Carlos Rossi has been selected to create an environmentally-driven, state-of-the-art terminal that will feature a “full suite of high-end services” within a luxurious, and also efficient, environment.

Guests of the VIP terminal—which will operate 24/7 every day of the year—will be offered all the services available at the airport from customs, immigration, security, baggage handling, shopping, car rental/limousine services and cargo, within the building on a one-to-one basis. But there is much more.

“Our service starts with a chauffeur service collecting our guests straight from the airplane in a luxury sedan,” explained Anita Newcourt, Vice President, Guest Experience at AEPM International. “Once in the VIP terminal, a dedicated host takes care of all the necessary formalities while our customers enjoy the lounge hospitality or prepare for business meetings or their next adventure.”

The departure service is just as smooth and the entire experience is designed to free up as much time as possible. “It’s all about a stressless journey and sophisticated comfort—all with a personal touch,’’ added Newcourt. Among those touches are:

While VIP lounges are common at airports, whole VIP terminals are far fewer, and in this case, the vertiport aspect of the project at GRU sets it apart as unique. The sector is one in which AEPM International has done extensive research. Chebil told us: “Our view is that advanced air mobility (AAM) will be a very important market and start to drive big revenues by 2026.”

Luxury and sustainability will both be features of the VIP terminal.

However, given the timescales involved in bringing vertiports and the entire AAM market to life, the CEO believes that the time to invest is the present as there is potential for eVTOLs to drive, from example, cargo services. “This is financially sustainable right now and that’s why we are targeting vertiport networks, and GRU will play a role here.” AEPM International itself has ambitions to build and operate 1,500 vertiports and terminals across five continents by 2045.

It is worth noting that GRU is the biggest gateway for air cargo in Brazil, handling 43% of domestic volumes. Giants like Amazon, UPS, DHL have all been investing in the wider UAM and drone delivery sectors.

GRU’s vertiport will be a hub (ie running several eVTOLs) and operational from the end of 2023. As things currently stand, the helicopter transport business in the city of São Paulo is worth $15 billion annually and naturally, eVTOLs will eventually start slicing off chunks of that. As the new shuttle electric services win over new customers and as the network expands across the city, and regionally, AEPM International’s early investment is likely to pay dividends.

From 2026 the view from the VIP terminal may include eVTOL vehicles as well.

The physical infrastructure costs of new point-to-point eVTOL landing sites in São Paulo are thought to be reasonable given that the space required is about the same as a helipad. The bigger costs are likely to be related to the safety elements, machine-to-machine communications, ATM integration, plus the entire operational side including electrical supply and charging.

With a background that includes the United Nations aviation safety agency ICAO, Chebil probably has better insights than most into when and how the regulatory environment will change for the eVTOL market. His instinct for a ‘cargo first’ approach is therefore where the smart investment money might also go, and GRU, with its dominant cargo position, could be the perfect starting point.