Groupe ADP is an international airport operator which owns and operates three French airports (Paris – Charles de Gaulle, Paris – Orly, and Paris – Le Bourget) under the brand name Paris Aéroport (Paris Airports). Groupe ADP also owns 46.1% of TAV Airports Holding,  a 51% stake in Airport International Group (concession holder at Queen Alia International Airport in Jordan), 49% of the share capital of India’s GMR Airport Limited and cross-owns 8% of the Schiphol Group. The Group is owned by the company Aéroports de Paris SA, which is publicly-listed at the Euronext Paris. The key shareholders of Groupe ADP include the Government of France (50.6%), Vinci S.A (8.0%) and the Government of The Netherlands (8.0%). 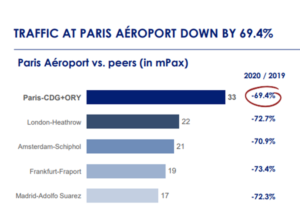 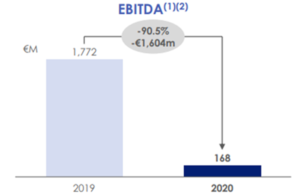 For 2020, the Group made a net loss of EUR 1,169m, which was EUR 1,757m lower than the EUR 588m net profit it achieved in 2019. While IATA has forecast a strong recovery of global passenger traffic by 2023, it is still too early to determine the extent of recovery for the year 2021. Groupe ADP has made financial stabilization a key priority and anticipates a return to the 2019 traffic level for its Paris Airports sometime between 2024 and 2027.