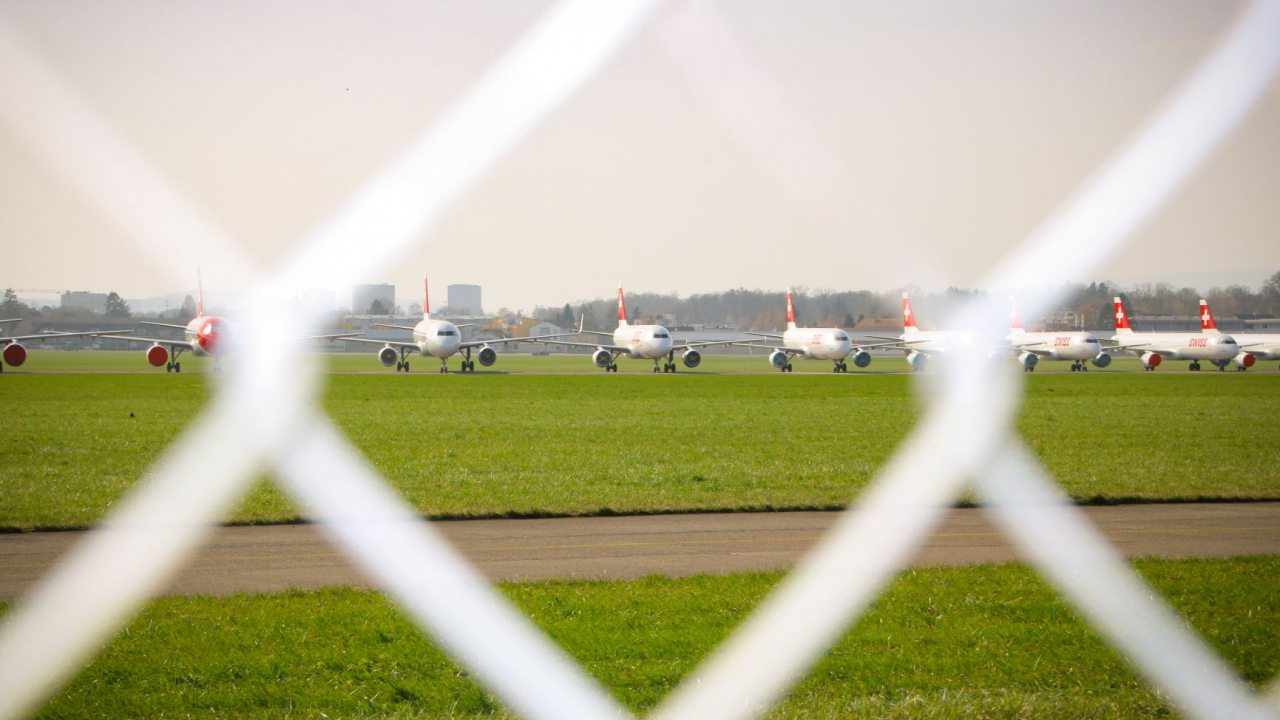 It is almost a year since the entire world has been plunged into a health chaos that has shaken the world of aviation. The world of airport PPPs has demonstrated regular and sustained activity for more than 30 years, with more than 600 airports (14%) under private management, representing 41% of passengers handled at these airports. There are high discrepancies according to airport size, with the largest ones in private hands.

Source ACI Until now, the previous financial crises or epidemics had had a very moderate impact on the airport PPP market dynamism. The COVID19 pandemic brought the airport infrastructure PPP market to a screeching halt. The COVID19 Shut Down the Market but the Appetite Remains Almost no transactions were concluded in 2020 with the exception of the few deals initiated before the rise of the crisis. Few upcoming transactions seem to be in the works for 2021, with the exception of regional airports in Chile, the 6th group of regional airports in Brazil, Nantes, Barbados and Tahiti airports but no major transactions. Despite the aids put in place by many international organizations, a large number of states will emerge from the crisis with reduced resources and ever-present infrastructure needs. The solution of public-private partnerships will therefore become obvious to ensure the sustainable development of their infrastructure, including airports. The usual investors in the airport sector have directed their capital towards other types of assets much less affected by the pandemic and more sustainable in the current context. However, most of them confirm they are nevertheless still open to invest in airports when the situation will provide better visibility. International airport operators, active players with increasingly ambitions in terms of the level of participation, are still showing an interest in developing their international portfolio although their priorities are currently more focused on defending their interests in existing concessions, securing their financial situation and implementing health recommendations. Finally, there should not be any doubt of the intentions of the banks which, even if they are very cautious about the resumption of airport activity, would always consider financing the development of airport projects. Slow Recovery in Passenger Traffic Without a Clear View of the Future All these positive intentions give confidence in the recovery of the Airport PPP market, but the traffic recovery remains uncertain and varies according to region and traffic type and it obviously restrains the market from bouncing back. 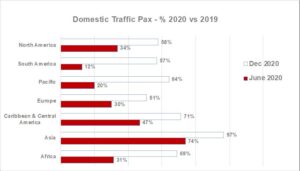 In a context of major concern following a very active second wave of COVID19, and despite the arrival of vaccines, the resumption of air traffic remains very tenuous and variable depending on the type of traffic. The latest December 2020 data show that global domestic traffic has already picked up in larger countries quite homogenously. An exception is  China that were only 8% off compared to 2019. Globally speaking, domestic markets have generally recovered close to 60% of the capacity offered in December 2019. Europe is an exception as 51% of the DSecember 2019 capacity were on offer during the Christmas month thyis year. On the other hand, International passenger traffic remains very slow to regain its marker share with seat offer figures mostly close to or below 40% of the comparable values in December 2019. 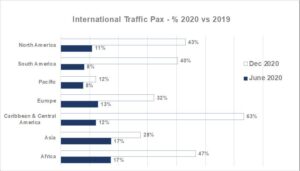 Only Africa and the Caribbean – Central America zone seem to demonstrate a faster return in international traffic with level of respectively above 60% and close to 50% boosted by tourism travels and travels for the purpose of visiting friends or relatives (VFR travels). The current situation can be explained by the fact that domestic traffic, necessary for the economic rebound of large countries such as China, Brazil, China, Mexico and the USA, should quickly regain 2019 capacity levels, particularly with the support from low-cost companies. It shows that a close to full recovery of domestic passenger traffic in 2021 is a reasonable, although possibly with an exception of Europe. The same will probably not be the case for inter-regional traffic and more especially for international traffic which may be delayed – many predict 2024 or even 2027 – not only to return to the levels of offers of 2019 but also to regain momentum for many reasons.  The reluctance of countries to reopen their borders without health constraints (quarantine, PCR tests or vaccination obligations), a significant reduction in the traffic of business passengers due to budget cuts and a growing attraction of video-conferencing tools or an increased awareness of environmental issues could seriously affect long-haul international- and transit traffic. This demonstrates that in the context of traffic resumption and without real prospects for confirming the pace of traffic recovery, the recovery of the airport PPP market could take two or even more years to recover and regain the confidence of investors and financers. The only exceptions to this situation are airports with high domestic or regional traffic in large countries and countries or areas with a significant volume of tourism. The early trends of 2021 seem to support this. Where Should the Investors Focus their Interest in Airports PPPs? Private participation ratios at airports vary by geographic area. It is clear that if Europe appears to be a precursor and a very advanced zone, it is North America, Africa and to a lesser extent Asia and the Latin America zones that remain open to the development of airport PPPs deals. 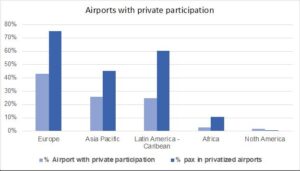 If we combine the analysis of the pace of traffic recovery and airport rates with private participation these areas should therefore offer great potential in the short term. North America remains a complicated market; slow to take off. More naturally, and for practical reasons related to  Africa’s infrastructure financing needs,  Latin America – Caribbean and to a lesser extent Asia should therefore be the zones to which investors should focus their primary attention. We would expect to see a more rapid and lasting return to growth thanks to a strong component of VFR and/or tourism travel traffic. In view of the difficult conditions that airport concessionaires have had to face with governments and banks to properly enforce protections offered in their PPP agreements to secure the resources to operate airport facilities, a relaunch of the airport PPP market can be possible only if governments ensure that the future airport PPP models improve. The key is the ability and willingness to enforce protections and prevent the impact of new similar crises – even though investors remain keen on the airport sector.

Ferrovial Strengthens Vertiports Team With Senior Hires From U.S. and...